Welcome to BORP Survival Guide originally a zine from 2013 that was hand printed.

What is BORP? BORP is a card game with a few skills and a few other character definitions. Its meant to be a quick to make and play ttrpg. Skills are to boost stats. The stats are the big definer of what you do.

Survival Guide: How to survive Undead, Aliens, Monsters and Myths is a game of fighting to make sure that humanity is able to continue on.

As a group or just the game runner can use the Apocalypse sheet to figure out the basics of what is ending. There is a sub sheet for each of the following Undead, Aliens, Monsters and Myths. There are rules for creating them from scratch or you can use the pre generator ones in the back of the book.

Undead - This is for the most part zombies with influences from video games, movies, tv and anime. There are basic types and mutations that are heavily influenced from games like resident evil and left for dead series.

Aliens - From greys and little greens to being influenced by the covenant from halo there are many forms of invasions they can do.

Monsters - What if someone moved a rock and a whole army of Sasquatches came pouring out of a cave? What if a whole stat was overrun by Chupacabras? Monsters is about taking classic stories, cryptids and making them a more prevalent issue than what they have been said before.

Other VTT support will come. Roles support for creators is amazing so all of our games get support on Role first!. We will add the links to the PDFs as well.

The original game modules have been lost but many of the notes from the playtests still exist and will be turned into a module. Below are blurbs on what they are about. See you soon.

Its not just a video game? - A module about zombie infestation inspired by zombie video games. This takes place in a small farming town. You play as either someone from the town trying to survive or a member of a rescue team. This is for 2 to 7 folks with one person as the Deal Keeper and the rest as players.

The game is complete but we want to make it better. We are raising money to hire folks to help us redo the book with editing, writing and art. This book was originally written in 2013 and has been consolidated from different playtest notes. This game will continue to be worked on and improved but will keep its original nature. The layout is almost the same as the original. Inside are notes for what is different between the versions out in the wild and here.

In order to download this game you must purchase it at or above the minimum price of $10 USD. You will get access to the following files:

Support this game at or above a special price point to receive something exclusive.

Every purchase will add a copy. 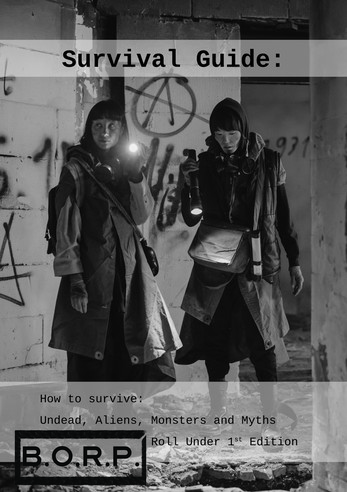